Nekton, pronounced neck-tan, are defined as aquatic organisms that can propel themselves through the water. This includes shrimp, crab and fish. Appropriately fitting for the research laboratory doing dynamic research out of the University of New Orleans. These efforts are spearheaded by Dr. Martin T. O’Connell who also serves as Associate Professor of Earth and Environmental Sciences at the university. For 18 years, Dr. O’Connell has studied, taught and disseminated fishery independent data that has no doubt provided a great insight into local marine life and its role in our world.

Our city is known for its culinary prowess, especially in the seafood world. The more recent trend of farm-to-table applies to the seafood industry by taking the approach of sea-to-plate. Restaurants like Seaworthy, showcasing wild-caught and sustainably harvested oysters, are proving to be a go-to choice for diners to taste the freshest catch. But with fresh fish, shrimp, crab and oysters right at our fingertips, we tend to overlook how this sustainability is affected by our climate, more specifically, the natural disasters that are prevalent on the Gulf Coast. The data that is collected by the Nekton Research Laboratory provides this valuable insight.

“We compare year-to-year trends in marine species and even can compare data from the 1970s,” states Dr. O’Connell.

This compilation of data allows research associates to gauge trends in how different species like fish are affected by their environment and any overall statistics that may stand out. Weather and climate play a huge role in these trends as well.

The Toll it Takes

Marine-wise, specifically during Hurricane Katrina, adult organisms such as redfish and trout can get out of the way of the impending storm. Juvenile fish species including eggs and larvae are not as lucky. Mortality occurs more frequently and causes an age gap in the coming years. This tends to go unnoticed until fisherman ask why they are not there or why has the population diminished so drastically since the years prior. Since these organisms are mostly microscopic, this research has been crucial in noticing this trend, and as it affects marine-life, the trickle-down effect goes to the seafood industry. 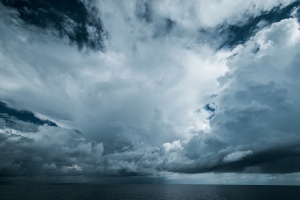 Dr. O’Connell further recalls shrimp boats lost on the levy after various hurricanes over the years.

“In the event that the boats can ride out the storm and make it back in, there may be no electricity. No electricity, no ice. Then you think about the processing plant, the equipment, and the workers. All of these factors are a domino effect and can severely impact the way seafood makes it to restaurants, businesses and ultimately the consumer.”

When teaching Environmental Science Policy, Dr. O’Connell teaches his students what the findings are and more importantly, the real word effects. Here in Southeast Louisiana, we see that when a natural disaster hits, fisherman get out to the water and when they do, there isn’t any way to process the catch, thus, resulting in a decrease in product. Another unfortunate side effect is how the competitors react to these disasters. Competitors from places outside the affected area know that the demand is still there and they, unlike their Gulf Coast counterparts, have the supply. Dr. O’Connell has also seen competitors spread untruths about the quality of shrimp that is being produced locally and how it is unsafe to eat. Unfortunately, he predicts the same thing will happen in Florida with the unprecedented effects of Hurricane Michael.  However, all these changes are not negative.

Although these effects put a lot of pressure on fisherman, a positive takeaway is that natural disasters actually help the fish species. The two to three year break that it may take to completely revitalize a fish population is a chance for the species to come back stronger and more plentiful for future years.

The Future of Gulf Marine Life

Marine life will always be affected by their environment, and the occurrence of natural disasters will undoubtedly stay prevalent. Although research points to some very hard truths regarding the fate of several marine species, we can look forward to the continued innovation regarding how populations can be sustained.

“At the end of the day, it goes back to, are we able to eat [the] seafood?” says Dr. O’Connell. “I’ve seen a lot of disasters in these 18 years and at no time was I afraid to eat Louisiana seafood.”