Good food that represents Louisiana well outside of the iconic, boot-shaped state is hard to come by. If you are ever in the town of Circle Pines though, you will find yourself not searching far. Sitting just outside the “Twin Cities”, Minneapolis and St. Paul, Bistro La Roux is a New Orleans concept restaurant tucked away in the suburbs. Its bustling menu of creole and Cajun dishes boasts signature southern fare such as crawfish and shrimp etouffee, jambalaya, po’ boys and seafood gumbo amongst other Louisiana favorites.
Although you may find more cheese curds and jell-o-salads in the neighborhood, what started as a successful food truck is now a booming brick and mortar restaurant.

Starting with the Roux

Bistro La Roux is the brainchild of Tim Glover, a native Louisianan. In 2001, Glover was in aviation when he moved to Minnesota to marry his wife Lori. Shortly after, the tragedy of 9/11 struck the country. Glover joined the National Guard and after returning from a deployment in Iraq, decided to pursue his passion for cooking. He turned that passion into a culinary career and opened up Cajun 2 Geaux, a Louisiana-forward food truck concept in 2010.

“In Minnesota, a food truck is very seasonal and finding that staff was tricky too,” imparts Glover.

Enter in a way to make the signature “New Orleans Experience” a year-around affair and thus, this mainstay was born.

“Everything starts with the roux, right?”, fondly remarks Glover. “So the name Bistro La Roux made sense.” 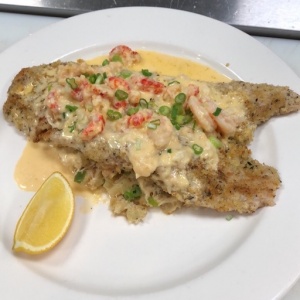 Glover enjoys cooking with fish the most. Its versatility and ability to pick up flavors lends to its creativity.

So how do you embody the exuberant, unpredictable, culinary mecca that is New Orleans? You start with knowledge.
It sure helps that Glover was born and raised in southern Louisiana, but he has taken it a step further by taking culinary education to the next level. As the popular interview question says, If you could have dinner with anyone dead or alive, who would you it be? Glover has turned that question in so many words, into reality.
In 2017, Glover began what one could call the dream externship. First working with famous Chef and restaurateur Donald Link and the Link Restaurant Group and then in 2018, working with Chef Tory McPhail, Executive Chef of one of the most iconic New Orleans restaurants, Commander’s Palace.

“It was an amazing experience and not one I ever thought I would have,” says Glover.

Working under such accomplished chefs and immersing himself in a New Orleans kitchen has allowed Glover to bring the flavors of the South to the North.

“He is a positive role model and [his] firm attention to detail were certainly something I want to emulate,” states Glover when asked what his biggest takeaway was from his most recent experience with Chef Tory McPhail.

Another part of this culinary experience is the authenticity of the product. Glover did his research and decided on Piazza Seafood as his main seafood supplier.

“They [Piazza Seafood] have good suggestions for me,” remarks Glover.

Fresh item availability can change so here at Piazza Seafood, we pride ourselves on having the knowledge to inform our restaurant partners about other options.

“Great service and a friendly staff,” he adds.

Put both culinary knowledge and a great product together, you get “A New Orleans Experience”. Ironically, this fitting phrase is also Glover’s tagline at Bistro La Roux. 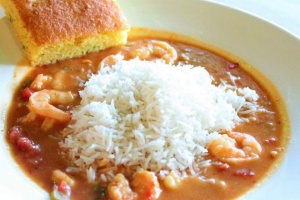 A customer favorite, the crawfish and shrimp etouffee.

A Future in the North

“I really enjoy the specials I do,” shares Glover. “I like bringing new flavors and combinations to my customers and having them get excited for what’s coming next.”

You can expect to see more creative dishes like this weeks appetizer debuts, Seafood boulettes, and a nod to his recent work at Commander’s Palace, the Commanders shrimp, veal and pork risotto. If those don’t have you running to the bistro, the menu staples of po’ boys, shrimp and crawfish etouffee, red beans and rice with andouille sausage and crawfish pies sure will.
Want to know more? Visit us at PiazzaSeafood.com to find out how just like Chef Tim, you too can get seafood delivered to you.
Huge thanks to Chef Tim for sharing his story, and New Orleans concept restaurant with us.
Stay tuned for other restaurant features from Piazza Seafood Presents.
Ready to try your hand at making one of our featured seafood dishes? You are in luck! Fresh and frozen seafood can be ordered directly from Piazza Seafood. If you are a business looking to buy from us, please don’t hesitate to enter in your information or call us directly at 504-734-0012.