Pont Breaux Restaurant is a lively, Cajun restaurant serving up a variety of delectable seafood dishes. These dishes are the vision of Chef Paul Gibson, who was recently named the executive chef at Pont Breaux. Gibson opened his first restaurant back in 2002, Bonnie Bell’s Bistro. Affectionately named after Gibson’s wife, Bonnie, it featured seafood fare that had Lafayette and other locals praising his ingenuity.

Fast forward to 2018 and Gibson has brought his talent and love for seafood to Pont Breaux’s where the new menu has generated quite a buzz. One of his latest, most noteworthy accomplishments was scoring high accolades at the Louisiana Seafood Cook-off with his creation, Mardi Gras Speckled Trout.

His dish that was a featured item on his menu in the month of June, showcases Louisiana seafood at its finest. Even more, Pont Breaux received this fresh shipment of speckled trout to use in this very dish from Piazza Seafood.

Gibson has been ordering his seafood from Piazza Seafood for over 15 years and because of that has developed a strong rapport with the staff.

“The pricing and quality is definitely where it needs to be,” says Gibson.

“I have never had a problem with any products.”

Not only did this fish photograph beautifully, but it obviously tasted just as good, beating out nine other competing chefs seafood creations. Paired perfectly with beet greens and fingerling purple potatoes and finished off in a creamy corn macque choux sauce. Talk about green, purple and gold goodness! 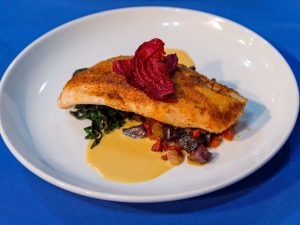 It’s no secret that Louisiana chefs are known for their culinary prowess. Local chefs have the perfect proximity to the Mississippi River and Gulf of Mexico allowing them access to some of the most noteworthy catches in the nation. Similar to Gibson, you want to get seafood from a place you can trust that has superior quality.

From fresh fish to oysters to Japanese specialty products, Piazza Seafood brings the catch to you. Restaurants and businesses from Louisiana to Florida and consumers like you and I can enjoy these superior products sent directly to them.

Visit us at PiazzaSeafood.com to find out more.

Big thanks to Chef Paul Gibson for sharing his dish with us.

Stay tuned for other restaurant features from Piazza Seafood Presents.

Ready to try your hand at making Mardi Gras Speckled Trout or another seafood dish? You are in luck! Fresh and frozen seafood can be ordered directly from Piazza Seafood. If you are a business looking to buy from us, please don’t hesitate to enter in your information or call us directly at 504-734-0012.