The word fusion is often used in the culinary world to describe the marriage of cuisines. When you arrive at the unassuming restaurant front of Seither’s Seafood in Harahan, a stone’s throw away from New Orleans, you aren’t expecting to find Asian inspired plates or sushi po-boys. Fortunately for locals and visitors alike, this is exactly what you get, an offering of fusion cuisine at its most creative. The plates at Seither’s are not only beautiful, but flavorful and definitely worthy of the multiple awards, rave reviews and constant praises they receive.

The son of a fisherman and great home cook, Jason Seither, Chef and Owner at Seither’s Seafood, was born to work with seafood in the kitchen. At an early age, you could find Seither helping his dad boil crawfish at backyard boils. At that time he didn’t know he could marry his artistic talent with his passion for cooking. So, when Seither was of age to get a job, he went to the nearest restaurant and asked to be put to work in the kitchen. With no prior experience, Seither was offered a position as a waiter. Not too keen on that idea, Seither still accepted and put in work over the years as a waiter, bartender and kitchen manager.

“My wife and I had just got married when I kept passing by this little place for rent around the corner,” Seither reminisces. “I would pull up and peer in the window.”

Thinking of all the things he could do in the space, he took a chance and 15 years later, Seither’s has drawn admires from around the state, including the most recent nod by Louisiana Cookin’ which named Seither’s the best place to get boiled crawfish.

Although Seither’s is known for its crawfish, the now restaurant and oyster bar is so much more than that. Offering award-winning po-boys, including the creative Sushi, which features snow crab and eel, Killer Roast Beef, and a blackened shrimp and avocado. Don’t worry traditional diners, 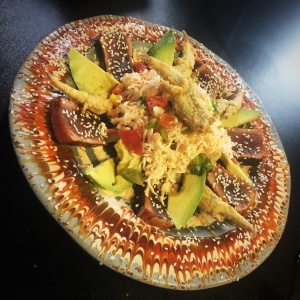 Seither hasn’t forgotten about you. Seither’s also offers fried and boiled seafood platters and Gumbo Ya Ya, a traditional gumbo offering. Now for the culinary thrill seekers looking to push the creativity bounds a little further, Seither has his own creations. The Tuna Volcano which features snow crab and shrimp, Jason’s Vacation, which is a play on a Caribbean-style dish with jerk chicken and pineapple but sticks true to southern roots with bell pepper and onion, and the Hook, Line and Dine, a daily fresh fish creation.

“[I like to use] whatever is in season,” says Seither. “Right now it’s fin fish.”

From sheepshead to triple tail, Seither loves fresh and local fish. He looks to Piazza Seafood to meet that need. Seither has been using Piazza since day one and he has developed a close relationship with the owners.

“Working with the owner[s] and being able to pick up/deliver,” has been major factors when it comes to the decision of who to buy from affirms Seither.  When asked why he continues to choose Piazza Seafood as his main seafood source, Seither says, “I want to do business with people around me. We can work together in that way.”

The train isn’t slowing down anytime soon for Seither. The five-time Oak Street Po-Boy Festival award winner has his sights set on the top prize again this year. Seither was just featured on FOX8 News and continues to have features in the local media including articles by acclaimed food culture writer Ian McNulty and food critic Brett Anderson. In the works is also a cooking show. Seither has been in meetings with a film studio and is excited to see what that project brings.

“[I] want people to be able to say, I can’t get that anywhere else,” Seither shares with excitement.

Want to know more? Visit us at PiazzaSeafood.com to find out how you can get seafood delivered to you and visit Seither’s Seafood for a creative plate your palate is sure to love.

Big thanks to Jason Seither, for sharing his passions and restaurant with us.

Stay tuned for other restaurant features from Piazza Seafood Presents.

Ready to try your hand at making one of our featured seafood dishes? You are in luck! Fresh and frozen seafood can be ordered directly from Piazza Seafood. If you are a business looking to buy from us, please don’t hesitate to enter in your information or call us directly at 504-734-0012.